Marengo Community Garden. Visitors from all over Orkney, and many from further afield, have sought out this special garden tucked out of sight in the village of St Margaret’s Hope. Whether to enjoy a few moments peace during a day of sightseeing, or take a quiet stroll around the paths admiring the vibrance and variety of the planting; or to meet a friend, find a bench and put the world to rights over a flask of tea, this space is appreciated by many folk. In 2015 it was included in Scotland’s Gardens Open Gardens Scheme and more recently it has taken up a regular slot in the list of local gardens on show during the Orkney Garden Festival.

The idea for a community garden was the inspiration of a small group of local gardeners. They shared an ambition to turn a neglected walled garden into a resource for the community and a place of beauty:

A garden FOR SALE as a building plot!

This garden had once been someone’s pride and joy, sheltered from the Orkney winds by drystone dykes, full of old flowering bushes, a holly tree, an apple tree, wonderful ivies and honeysuckle in profusion. Many older residents of the village of St Margaret’s Hope remember it as a showpiece for visitors and garden enthusiasts. Unfortunately, times and interests change and over many years the garden had become overgrown and derelict and eventually it looked like it could disappear under concrete blocks. (From an early press release)

In January 1997, the Burray and South Ronaldsay Community Garden Association was formed with the aim of saving the garden, restoring it to its former glory and establishing Orkney’s first Community Garden.

A small team of volunteers worked through 1997 and 1998 to make their vision a reality.

The committee’s first tasks in the early months included applying for grant funding and organising local fundraising events. Grants were received from The Lottery, the Elf Consortium, Rural Initiatives Scotland and the Co-op. The Burray and South Ronaldsay gardening club was formed, and the first Garden Trail offered the chance to visit local gardens and enjoy what has now become the traditional cream tea refreshments laid on by Marengo Garden volunteers. 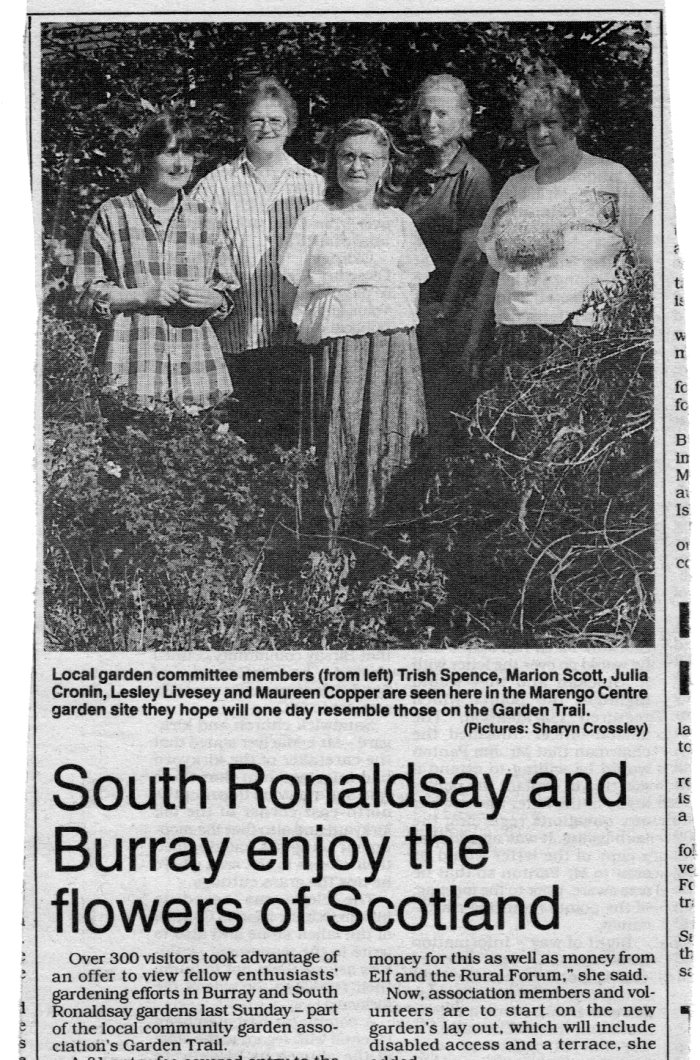 Once the land was secured, work began to design and establish the new garden.

Designing and creating the garden

Firstly, the site had to be cleared whilst preserving some of the original features and planting. Plans for the new garden space included new sections of drystone wall at the perimeter, a terrace, a children’s area, seating and composting corner. The original stone-built shed was repaired and alongside it, a new wooden shed was erected. 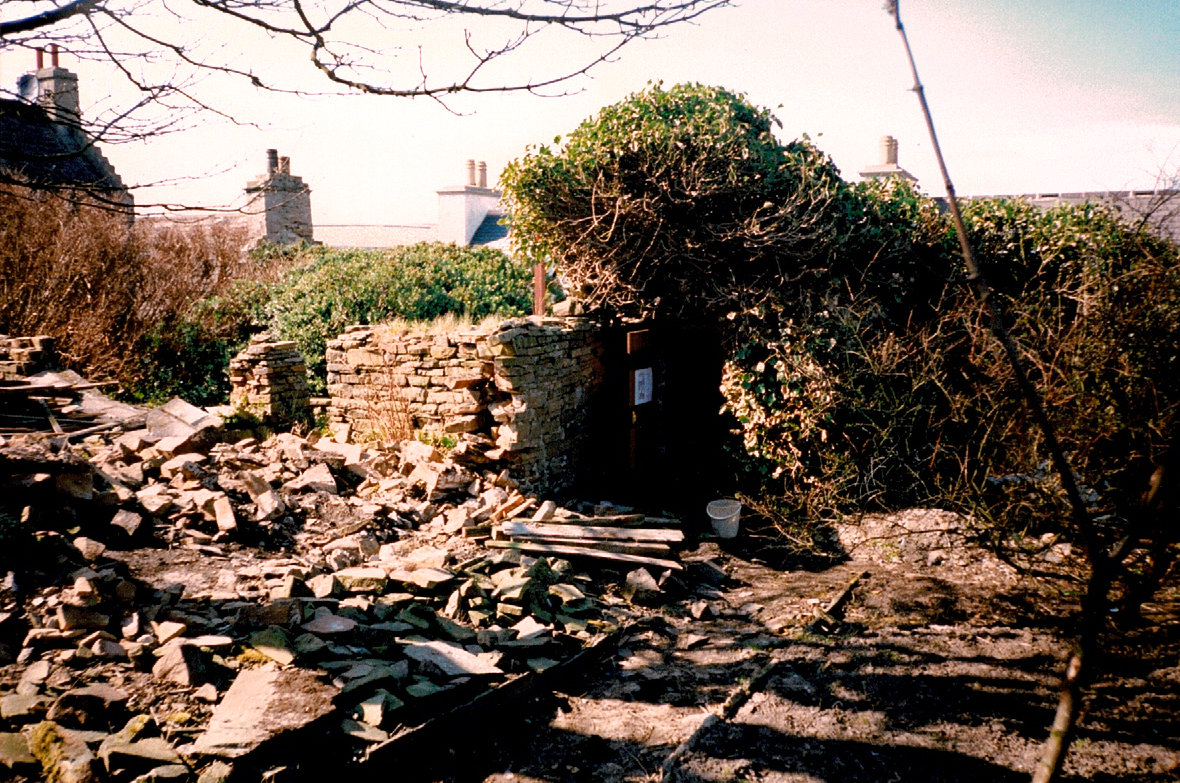 In 1998 the Marengo Community Garden was chosen as a project to feature on Grampian Television’s Beechgrove Garden programme.

The ‘Hit Squad’ paid two visits to St Margaret’s Hope. In addition to the advice and encouragement they offered, their visits – one at the beginning of the project, and one to see the completed garden – concentrated efforts to complete the garden make-over. 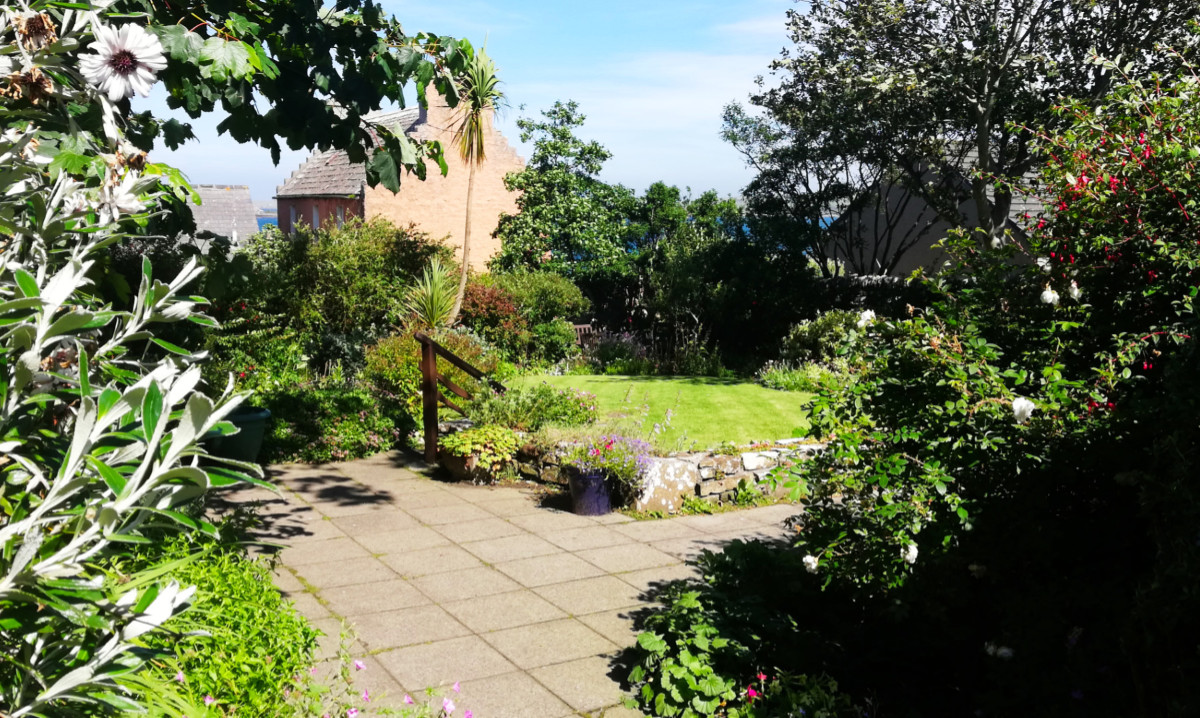 Maintained by a small band of dedicated volunteers (including Lesley Livsey, Trish Spence and Elli Pearson from Hope Cohousing), the garden continued to flourish. Its annual plant sale and cream teas in August is always a popular local event. They have a Facebook page which is regularly updated with photos and news.

People often wonder where the name ‘Marengo’ came from. In 1840 an American barquentine – The Marengo – travelling from Newcastle to New Orleans with a cargo of coal and glass was wrecked during a gale, in nearby Widewall Bay.  The crew was rescued, and the deckhouse was among items salvaged from the wreckage. It was put into use as a store for a small shop at this end of St Margaret’s Hope. Interestingly, the records note that the ships cats were also saved. Perhaps there are still cats of American ancestry roaming around South Ronaldsay (George Esson – For Those in Peril). [Thanks to Ingrid and Herbert Mackenzie for this information].